20 Great College Athletes That Busted in the Pros

2. Bo Kimble
Kimble was a huge star at Loyola Marymount, averaging 35 points a game in the 1989-1990 season. He was named an All-American and drafted eighth by the Los Angeles Clippers in 1990. He played three season and averaged five points per game, never quite finding his groove in the pros.

3. Greg Oden
Oden looks like a gentle giant, so it’s sad to catalog his misfortune. Drafted number one overall by the Portland Trailblazers in 2007, the Ohio State superstar has played in less than 100 games in five years, and has suffered through three devastating knee injuries. Oden was thought to be the next great NBA center, but big-man injuries ruined his once-promising career.

4. Michael Olowokandi
The number pick in the 1998 NBA draft, Olowokandi excelled at Pacific University for three seasons, dominating the competition. But his NBA career was marred by disappointment, first with the Los Angeles Clippers who drafted him, then with the Minnesota Timberwolves and Boston Celtics. Olowokandi averaged eight points and 7 rebounds in nine seasons, and is considered one of the biggest busts in NBA history.

5. Ryan Leaf
It’s difficult to believe that there was a real debate in 1998 as to whether Leaf or Peyton Manning should be the number one pick. Leaf was a big college star at Washington State, and was projected as more talented than Manning. The San Diego Chargers drafted him second overall, and Leaf quickly proved too immature and erratic to excel. In four years, he threw 14 touchdowns and 36 interceptions, and played for four different teams. After busting out of the league, Leaf has spent time in and out of jail for drug charges.

6. Brian Bosworth
Bosworth played ball at Oklahoma, where he was one of the most intimidating and aggressive linebackers in college football. After a steroid suspension, Bosworth was drafted number one in the 1987 NFL Supplemental Draft, and played two seasons. He had four sacks and 160 tackles, but injuries and a bad attitude derailed his career.

7. Mark Prior
Prior was an outstanding pitcher at USC, and won several player of the year awards in 2001. He was drafted by the Chicago Cubs in 2001, and entered the majors with boundless promise. But in five seasons with the Cubs, injuries destroyed Prior’s career, and though he was an all-star in 2003, it only served to show how disappointing he was in the pros. He won 42 games and struck out 757 batters, but he’s known more for what he could have done than what he did.

8. Adam Morrison
Morrison was an all-star at Gonzaga, averaging 28 points per game in 2006, and earning co-player of the year honors with JJ Redick of Duke. Morrison was drafted third in 2006 by the Charlotte Bobcats, and never approached his collegiate stats. He played in 161 games, averaged 7 points and 2 rebounds and shot 37 percent. He is now an assistant coach with Gonzaga.

9. Hasheem Thabeet
Thabeet was a star when he played basketball for the University of Connecticut. He was drafted second by the Memphis Grizzlies in 2009, and promptly showed that he wasn’t ready for primetime. Thabeet couldn’t adjust to the pro game, and even his defensive prowess was limited. Thabeet now plays for the San Antonio Spurs, but mostly plays with their affiliate D-League squad.

10. JaMarcus Russell
Russell was a standout at LSU, leading the Tigers to dominant Sugar Bowl win that showcased his cannon arm and NFL size to pro scouts. The Oakland Raiders drafted him second in 2007, and paid him $40 million to become the face of the franchise. Russell couldn’t live up to the pressure, and was out of the league three years later, having accomplished nothing at the pro level.

11. David Carr
Carr was a star with the Fresno State Bulldogs, and became the number one pick in the 2002 NFL Draft, going to the Houston Texans who had just joined the league that year. Although Carr had three so-so seasons to start his career, he lead the league in sacks taken, and that limited his effectiveness. The Texans had two wins in 2005, and Carr was released, earning backup jobs with the San Francisco 49ers and the New York Giants. He is now retired, after throwing 65 touchdowns and 71 interceptions in 10 NFL seasons.

12. Tony Mandarich
Mandarich was a massive offensive lineman who starred at Michigan State before becoming the number two pick of the Green Bay Packers in the 1989 NFL Draft. Before he played a single professional down, Sports Illustrated dubbed him the best offensive lineman prospect in history, setting him up for failure. Mandarich busted as a pro, playing only three seasons for the Packers and seven in the NFL.

13. Rick Mirer
Mirer was a celebrated quarterback at Notre Dame, and when legendary coach, Bill Walsh said Mirer could be as good as Joe Montana, everyone was sold on him. Mirer was drafted second in the 1993 NFL Draft by the Seattle Seahawks, but never excelled. he played four seasons, threw 41 touchdowns and 56 interceptions, and couldn’t win the starting job when he was traded to the Chicago Bears in 1997.

14. Ki-Jana Carter
Carter trucked defensive players as a star running back at Penn State, and was drafted first in the 1994 NFL Draft by the Cincinnati Bengals. But before he could play a single down, he suffered a major knee injury and didn’t start until 1995, when he averaged a paltry 3 yards per carry. Carter played four miserable seasons with the Bengals and never became a star.

15. Tim Couch
Couch played at Kentucky where he was one of the top players in the game, and earned all-American honors. He was drafted number one in the 1999 NFL Draft by the Cleveland Browns. He played five seasons for the Browns, amassing 64 touchdowns and 67 interceptions. He was cut in 2003 and never hooked up with another team.

16. Anthony Bennett
Bennett was a physical and athletic freak when he played at UNLV, which earned him the number one pick in the 2013 NBA Draft by the Cleveland Cavaliers. But it appears as if Bennett lacked the fundamentals to compete at the pro level, and in three seasons has averaged 4 points per game. Bennett was traded to the Minnesota Timberwolves in 2014, and has still not made a mark in the league.

17. Derrick Williams
Williams overwhelmed opposing players as a power forward for the Arizona Wildcats. In his senior season, he lead Arizona to the Elite Eight and was considered a possible number one pick. He went number two in the 2011 NBA Draft to the Timberwolves, but his size and strength didn’t translate in the pro game, and in four seasons, he’s averaged 9 points and 4 rebounds.

18. Tim Tebow
You can argue that a quarterback who lead his team to a playoff win over the Pittsburgh Steelers in 2012 shouldn’t be on the list, and you’d be wrong. Tebow was a first-round pick by the Denver Broncos in the 2011 NFL Draft, so he must be judged by that lofty standard. The bottom line is that Tebow can’t throw. He’s a good athlete and a fine human being, but he can’t throw or read defenses, which is why he’s struggled to make a comeback since the Broncos released him in 2012.

19. Joey Harrington
Harrington was a great quarterback for the Oregon Ducks, and was the number three pick in the 2002 NFL Draft, going to the Detroit Lions. Harrington played three seasons for the Lions, then spent a year with the Miami Dolphins, Atlanta Falcons and New Orleans Saints. He threw 79 touchdowns and 85 interceptions in seven seasons, and never justified the hype. Harrington now works as an analyst for Fox College Football. 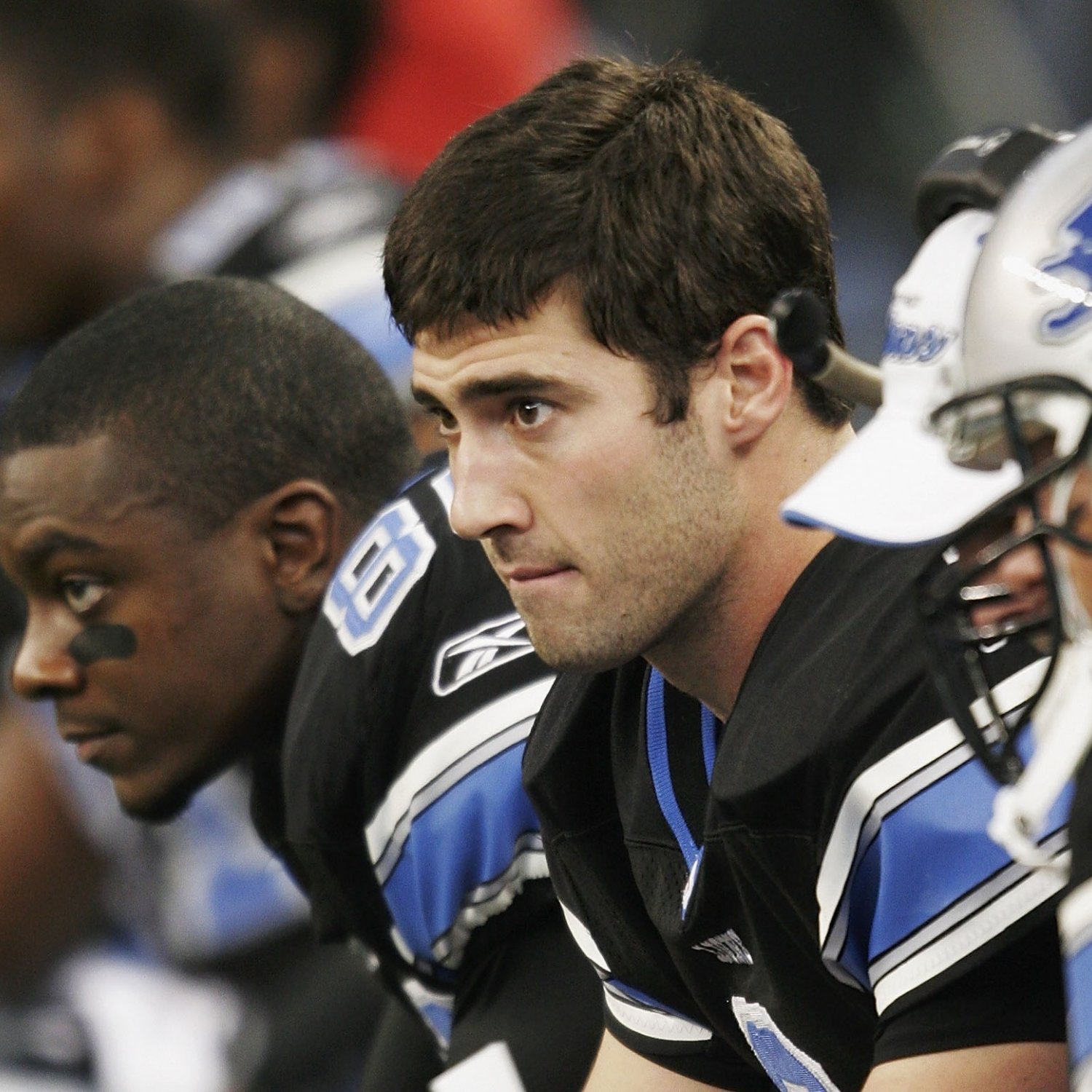 20. Pervis Ellison
Ellison earned the nickname “Never Nervous Pervis” for his cool performance as a freshman in the 1986 NCAA tournament, won by Pervis’ Louisville team. Ellison was the first pick in the 1989 NBA Draft by the Sacramento Kings. He never dominated in the pros, averaging 9 points and 1 assist in 12 NBA seasons.